By summer, there could be no ice left at the North Pole

It seems unthinkable, but for the first time in human history, ice is on course to disappear entirely from the North Pole this year.

The disappearance of the Arctic sea ice, making it possible to reach the Pole sailing in a boat through open water, would be one of the most dramatic – and worrying – examples of the impact of global warming on the planet. Scientists say the ice at 90 degrees north may well have melted away by the summer.

Shit’s going to hit the fan.

Remember, just a few months ago I made this post about the new laws pushed by the Bush Administration, to give the president the sole power to declare a national emergency, and remember that it gives the president absolute dictator-like powers to rule every public and private aspect of the country?

“””
I, GEORGE W. BUSH, President of the United States of America, find that the current existence and risk of the proliferation of weapons-usable fissile material on the Korean Peninsula constitute an unusual and extraordinary threat to the national security and foreign policy of the United States, and I hereby declare a national emergency to deal with that threat.
“””

So there you have it. As for now, Bush alone, without having to gain anyone’s approval for this actions, has more power to rule USA than any dictator in the history of our planet, quite literally and worst yet – completely legally.

White House Press Release
For reference, here is the official document outlining Presidential powers during a state of national emergency.

But this is not as bad as it gets. Defying official CIA intelligence that Iran has put a halt to it’s nuclear program, the Bush administration plans to take military action against Iran before their term is up.

Here is a good article explaining why the war with Iran is inevitable.

Last but not least, two separate UFO incidents have caught my eye this week.

This one in the UK, where numerous UFOs were seen by hundreds of people, including the army.
Source

I’m laughing right back at you, silly skeptics ;) 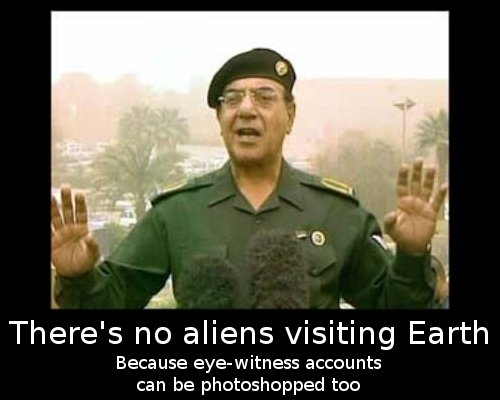